Brian Robertson’s book on a management system with better performances has just come out in French in a translation to which we contributed greatly in order to ensure a consistent message. This book leaves no one indifferent: a clear organizational structure for a distributed decision-making process, bye-bye to the “little dictators” and hello to intrapreneurship 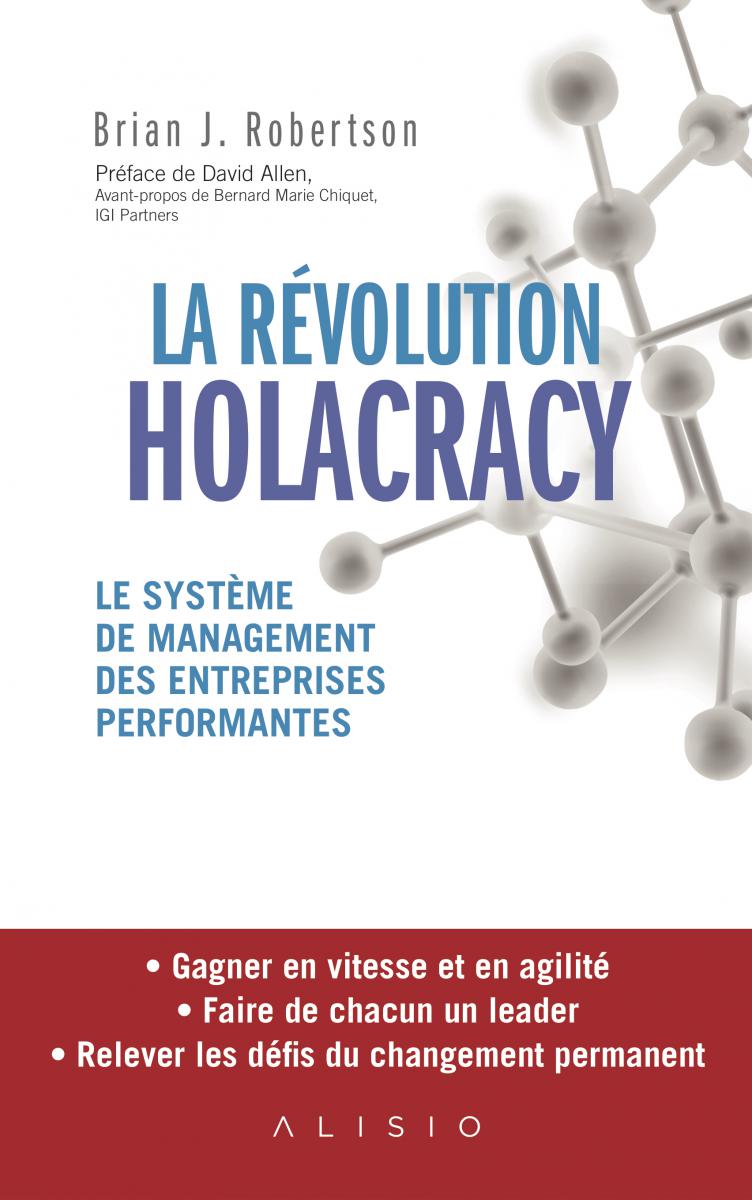 Who is this book for?

This is a highly technical book, “only” presenting the Holacracy system. For people who need to get a better understanding of organizations and the wider philosophy behind them before adopting a concrete solution, I suggest Frédéric Laloux’s book Reinventing Organizations or Gary Hamel’s La Fin du Management.

As a tool, Holacracy may also seem very theoretical to you while you are reading, whereas in reality Holacracy truly is a practice that works in over 350 companies around the world as I am writing this article, the largest company to have adopted it to date being Zappos. If you prefer to explore theory before practice, you will enjoy reading this book. If, on the other hand, you prefer experimenting and seeing concrete practices, we advise you to read our Comic Book on Holacracy, which presents the system in a fun, illustrated manner.

If you already apply Holacracy, this book will give you a more detailed guide to the rules of the Holacracy game proving support for your practices and giving you a more in-depth understanding of it.

Who is this book not for?

If you are the kind of business owner/director/manager who is looking for a “turnkey” solution to apply once you’ve finished reading the book, you should know that that is not how it works. While the author does dedicate an entire chapter to people who are not ready to adopt the whole system, it is my duty to inform you that you will not become a Holacracy expert after reading this book and you will not be able to implement the system in your organization overnight. At iGi, we have been practicing and implementing Holacracy at organizations for more than 7 years and we can tell you that, as is the case with all major changes – real disruption with the past – it takes time and means changing habits. If, after reading this book, you feel inspired to implement Holacracy in your company, we recommend that you seek help from an expert on the subject. Businesses that have tried to implement it alone – at least those we know about – have failed. Changing a satellite’s orbit takes energy and outside intervention.

“... progress can only be made through spectacular disruption,
not by progressive little changes”
- Nellie Bowles

If you are the kind of business owner/director/manager who is focusing more on a liberation movement for the company without looking for a meta-model equipped as a catalyst for change and who wants concrete tools for developing your employee compensation structures, performance assessment processes, recruitment methods, etc., this book probably does not have what you are looking for as it does not deal with these issues. Holacracy changes the organization’s power structure, its operating system. All the rest (compensation, assessment, recruitment, etc.) are what are called “applications” to be downloaded onto the Holacracy operating system. Many businesses have started to code applications compatible with Holacracy.

My goal is not to give a detailed summary of the book, but rather just to highlight a few concepts and passages that might make you want to go farther.

The book starts with a foreword by David Allen, creator of the GTD (Getting Things Done) method who has applied Holacracy in his company for several years. He rightly points out that “Holacracy is not a panacea: it won’t resolve all of an organization’s tensions and dilemmas”, but, in his experience, “it does provide the most stable ground from which to recognize, frame, and address them”.
Lastly, we could say that Holacracy is a free-energy generator designed to deal with tensions. The term tension is used neutrally, it can be a problem or an improvement, it is a difference between reality and what could be, it is a potential.

Far too often in organizations, if an employee feels tension and is too shy or is at the bottom of the pyramid – or both – what that person feels, if they are alone, will be ignored or set aside. Holacracy is a daring system as its goal is to ensure that all tensions felt by anyone, no matter where in the organization, can be rapidly and reliably processed in a meaningful evolution, on condition that it is aligned with the organization’s purpose.

For the author, Holacracy is made up of 4 elements:

Holacracy is first and foremost a constitution, a set of rules of the game with open source availability and applicable by all, including former directors and managers. Nobody is above the law.

When those who hold authority decide to change the organization’s method of governance by ratifying the constitution, they in fact transfer the relationship of subordination that they had with their employees to the constitution’s rules of the game. All coworkers, whether employees or managers, are then no longer subordinated to the hierarchy, but rather to the rules of the game.

A new way to structure the organization

While the hierarchical pyramid structure was organized around people, with one person = one title = one box in the organization chart, we now have a structure organized around the work to get done, with each brick in the work being a role, and a person can be assigned to one or more role(s) in one or more circle(s) (team/department).

Holacracy offers a fractal organic structure that evolves all the time, like all complex systems in nature.

As Bernard Marie Chiquet, founder of iGi Partners, often says, “Power is something too serious to be left to humans.”

Holacracy proposes a new space in which power is managed: governance. And this space is managed through a decision-making process that the author says is highly democratic. This process makes it possible to define the authorities that the organization needs to operate: the roles, in which each person assigned has autocratic power.

In a conventional system, only those at the top of the pyramid can change the organization chart, which leads to long, hard restructuring processes that are already obsolete before they are fully implemented. In Holacracy, governance occurs at all levels, in all the “teams” which are self-organizing, always in the same direction as the company’s purpose.

In the book, the author dissects a governance meeting and its process, both for the participants and for the role of the facilitator.


A meeting process to synchronize teams and move work forwar

Holacracy also calls for a second kind of meeting, operational meetings called tactical meetings. These meetings, similar to the team meetings that you probably already hold, allow all the teams to synchronize and to eliminate constraints blocking the work process. They help to model governance, providing clarity for authorities and identifying possible holes in the organization chart (a missing role, for example).
In the book, the author dissects a tactical meeting and its process.

This book give an exquisitely precise description of the Holacracy system and, even though it gives little or no philosophical views or wider view of the company, it does give a neutral, effective review of Holacracy as an alternative to the pyramid management system.
I read it after working in Holacracy for 5 years and implementing it in many organizations, so I cannot claim that someone who is totally new to the system could understand it overall, but the illustrated explanations make the message much more accessible. As the author is also a trainer and also developed the constitution, we can feel all his passion in his writing.
This book is absolutely not just another management technique, it is a radical change to the organization’s very structure.

This book really is a must read for all business owners/managers who want to empower their coworkers, give new meaning to work and make their organization more flexible with improved performances. The simple fact that it only took 9 months to get a French translation (published in June 2015, the second translation after China) shows how much the working world is suffering and needs a breath of fresh air.

Weaknesses:
Link to an excerpt.
Leave a comment below to give your feedback on the book.

Margaux
Margaux is one of the first and youngest certified Holacracy Coach (since mid-2013). She was invited to join iGi as a full partner in february 2011. She began by filling the Communication & Marketing role, and now holds about 30 roles throughout the organization with an increasing range of authority and focus. She is now mainly involved in the implementation of Holacracy by coaching and helping clients catalyze their learning. On top of iGi, Margaux is a professional mediator (certified CAP’M).

To read on the same topic